The last few weeks I’ve been reacquainting myself with a voice from my past.  The experience has been both surreal and a homecoming at the same time.

When I first heard my Grandpa’s 1946 Gibson ES 150, my ears had only begun to comprehend the sonic adventure they were designed to enjoy. But even at three months old, it appears the Gibson and I had a connection and a purpose that would slowly unveil itself to me. 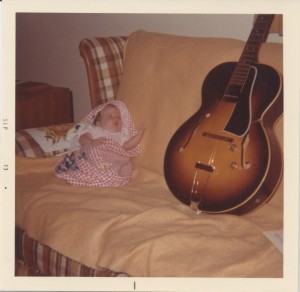 The Gibson and I come to an understanding

Originally, the Gibson was my Grandpa’s main squeeze, when he joined a country band just after high school.  He retired the guitar to its case shortly after this picture was taken and only occasionally played it when we visited.  A newer acoustic had joined the family that allowed my Grandpa the ease and flexibility of playing the bluegrass tunes he loved to play for hours.

In the 80’s the Gibson took up residence in our living room, where my mom would practice her chords and my dad would recant folk songs from his childhood. Each time the Gibson would make a brief appearance outside its soft, protective shell, I’d marvel at its warm sunburst sheen and the deep resonant tones it had: so different from the bright brassy tones of its newer sibling. I was in awe.

The Long and Winding Road

Years passed, I continued down a different musical path, choosing my voice and not the guitar to express my love of sound.    Now retired to a closet, the Gibson waited.

Time marched on; I had long since separated my love of sound and music making as something I did only when the “real” work of paying the bills was done.  More often than not, I was too tired to utter anything but an exhausted yawn.

Then it happened. One Sunday in July 2006, I woke from a deep, restful sleep when a strong inner voice said, “Music is here for you.  You need to make music again.”  I immediately turned to voice lessons for answers.  Although I was energized by what I discovered, something still seemed to be missing. I wanted and needed something deeper.

A few months later another realization floated into my consciousness, “I want to learn how to play guitar.” The statement I uttered seemed so natural, so right.  “But how?”  I reasoned with myself.  I could count on one hand the number times I had run my small forefinger across the strings of my Grandpa’s guitars, but that far from made me ready, or “worthy” of the instrument. But the small inner voice continued to insist.

Despite my dad’s warning that forming calluses would make the experience unpleasant, I continued to persist. Then I dropped an even bigger bombshell, “I want to refurbish and play the Gibson.”  Years in the closet had dried its tuning keys and left them in such a fragile state that they looked like a sneeze in their direction would reduce them to dust. Furthermore, dad insisted after years of no maintenance and a move across country from Minnesota to the arid Arizona desert its neck, body and electronics had most likely seen better days. I resigned myself to change its rusted strings one day, and put it under glass to gaze at lovingly.

I started lessons the following spring of 2007 and have continued to build my confidence and musicianship with a little help from the Beatles, my little parlor and my Grandpa’s acoustic.

Until a few weeks ago.

When I am Sixty-four

My parlor needed a set up and the acoustic’s wider bouts made playing tiring, especially after I had grown so accustomed to a smaller bodied guitar. My teacher had a solution.  I had told him the Gibson’s story and showed him a picture of it years earlier.  “Bring it to lesson next week and we’ll take a look,” he said.

With giddy excitement, I did.  He carefully replaced the strings, lowered the action and reset the intonation.  I am not sure how the tuning keys remained intact, but they held together long enough for me to hear it amplified from the warmth of a tube amp for the first time.

“Can you hear this Grandpa?”, I shouted to the heavens, as I sat near tears the entire lesson.

Once home, I let the tears come.  I now knew why I had to finish bringing the Gibson back.  It had a voice that had been nearly snuffed out, because it was deemed old, past its prime. But it had a voice none-the-less and it needed to be heard.

I realized that its story was very much like my own. Since leaving choral singing behind in high school, I had resigned myself to making music when it was convenient, or when I thought I was worthy, not because I needed to do it for my emotional or spiritual well being. I had a song too and this guitar was going to help me find it.

When the keys finally gave out three weeks later, the next phase of the restoration began. After some trial and error, we found a new set of tuners that gave the Gibson’s headstock a decidedly fresh look while still maintaining its antique charm. 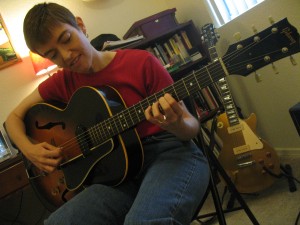 My grandpa's 1946 Gibson ES 150 resurrected from the closet

Even though the Gibson is now 64 years old, I know our story is far from over.  The sound memories that it carries within its wood are here for me now to listen to, reflect upon and to create brand new melodies that will continue to add to its character.  I know each time I take it from its case and smell its sweet scent — which reminds me of an old leather-bound book and brandy — I’ve forged an unspeakable connection that can only be explained as sonic intuition.

Revealing where technology, sound and music intersect to create health